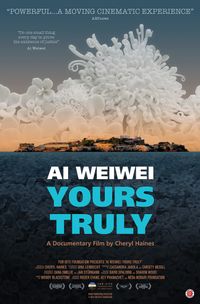 July 23 - August 9 | Not Rated | 76 min | Directed by Cheryl Haines and Gina Leibrecht Human rights become profoundly personal when Ai Weiwei, China's most famous artist, transforms Alcatraz Island prison into an astonishing expression of socially-engaged art focused on the plight of the unjustly incarcerated. At the core of the installation, called @Large, were portraits of prisoners of conscience coupled with the opportunity to write letters of solidarity to the imprisoned. In her impassioned and powerful film, director Cheryl Haines captures this monumental exhibition from conception to fruition, and as well visits current and former prisoners, including American whistleblower Chelsea Manning, to learn how these letters were vital to their survival. Virtual Cinema FAQs, including technical questions on watching on a Smart television or other TV platform: parkcityfilm.org/about/virtualcinemafaq/ Tickets purchased through the Virtual Cinema series help generate revenue for Park City Film. Your support is greatly appreciated!