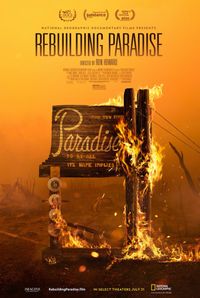 Join Park City Film for another amazing virtual screening. See REBUILDING PARADISE from July 31 - August 17. On the morning of Nov. 8, 2018, a devastating firestorm engulfed the picturesque city of Paradise, California. By the time the Camp Fire was extinguished, it had killed 85 people, displaced 50,000 residents and destroyed 95% of local structures. It was the deadliest U.S. fire in 100 years — and the worst ever in California’s history. REBUILDING PARADISE, from Academy Award-winning director RON HOWARD, is a moving story of resilience in the face of tragedy, as a community ravaged by disaster comes together to recover what was lost and begin the important task of rebuilding. | Rated PG-13| 95 mins | Directed by Ron Howard. Virtual Cinema FAQs, including technical questions on watching on a Smart television or other TV platform: parkcityfilm.org/about/virtualcinemafaq/ Tickets purchased through the Virtual Cinema series help generate revenue for Park City Film. Your support is greatly appreciated!