Woman-around-town Cindy Gottshall came by the KPCW studios today during The Local View with Randy Barton to celebrate her 46th birthday. Her appearance is an annual tradition, and she is one of only a handful of locals who have a standing invitation to announce their birthdays on air.

Folks called in to wish her a happy birthday and even City Manager Diane Foster called in and sang her wishes.

Cindy's actual birthday is Sunday, January 12th. But as her father told KPCW, "We start [celebrating] early and finish late."

As it should be. 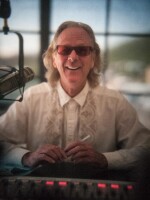 Randy Barton
Reigning as the king of The Local View afternoon show, Randy not only shares the arts and entertainment opportunities of the area, he has had – or still has – a hand in creating them. Randy is always an entertaining ride, whether he has guests on or is talking to himself.
See stories by Randy Barton