Outdoor Retailers returns to Utah as tradeshow looks to evolve

For more than two decades, Utah was home to one of the biggest events in the outdoor and winter industry, the Outdoor Retailer tradeshow. After a five-year stint in Denver, the show returned to Salt Lake City this week.

The Outdoor Retailer tradeshow, known as OR, returned to Salt Lake City this week, and rolled out Monday with a new on-snow day that local businesses said demonstrated why Utah is the right home for the show.

Park City resident Thomas Laakso, vice president of product and operations at DPS Skis, said Monday’s event was especially useful to companies like his, that design and manufacture their products right down the road. DPS designers and engineers were at Brighton Monday helping fit and demo skis.

“The DPS factory is just off of 600 South, really close to the convention center,” Laakso said. “What’s really great is we have about 50 people in the factory, and right now we have people that are making skis and twisting screws getting people out on the same skis that they made the week before. That’s really inspiring for them to see how they’re affecting the sport that we love and being able to see people coming back going ‘I love these.’”

Salt Lake City had hosted OR for 22 years before organizers moved the tradeshow to Denver in 2017 under pressure from brands and outdoor enthusiasts opposed to Utah’s environmental and land use policies. That included an emotional conflict over Bears Ears National Monument, which the last several presidential administrations have sought to either enlarge and protect, or reduce in size.

“Our industry thrives on the protection of public lands and it's vital for the growth and health of the outdoor industry,” said Marisa Nicholson, OR senior vice president and show director. “Our industry as a whole wanted to take a stand on having our voice heard that these lands are important. They're important to the health of the industry, and for all of Americans who want to recreate. And so, at that time we made the decision to move the show to Denver.”

OR announced in March 2022 that it would return to Salt Lake City in January 2023. According to Nicholson, that decision was based in large part on ease of access to recreation here and support from local officials, including Salt Lake City Mayor Erin Mendenhall and the Salt Lake Chamber.

“Over the course of the last five years, we've been talking with our industry,” Nicholson said. “The idea of being able to work together to be unified and figure out ways to ensure that the industry has a voice at the table has been really important. And so in our conversations with our industry and asking them where would they prefer the show, overwhelmingly we were getting responses that they loved the show in Salt Lake City and the access to the recreation within Utah. But they really want to have the opportunity to be heard, and to work closely with both state and local officials.”

After the on-snow demo day Monday, OR opened the tradeshow doors at Salt Palace Tuesday morning. Show organizers announced they expected more than 400 exhibitors throughout the week, up from the 330 exhibitors at the 2022 show in Denver, but far less than the 1,000+ exhibitors when OR was last in Salt Lake five years ago.

Some longtime attendees of the show said the convention center Tuesday felt empty. And some of the biggest names in the outdoor industry, including Patagonia, North Face, and REI, are among those who did not return to OR in Utah, announcing that they wouldn’t do so until state leaders do more to preserve state and federal lands.

Looking ahead, Nicholson said OR is evolving beyond the traditional indoor format to include more on-mountain days like Monday at Brighton.

“The next big thing will be happening this summer we're introducing a consumer event up at Snowbasin called Outdoor Adventure X, the first of a kind consumer event. That will be the weekend leading up to Outdoor Retailer Summer. It will have on-site camping and all sorts of on mountain experiences from climbing and hiking, music and food. It will be an incredible time for people to come out and enjoy, for families to come and have fun experiences and learn things that maybe they they've never tried before and they want that opportunity.”

For the next snow show in Utah in 2024, Nicholson said OR will be working closely with the buying group event Winter Sports Market to streamline the calendar and create better efficiencies for their customers. 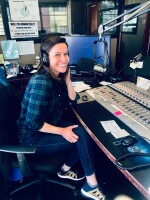 Sarah Ervin
Sarah has spent her career in public service, advocacy, and community engagement. She and her family moved to Park City in 2018, at which time she started volunteering at KPCW as a weekday DJ. A California native, Sarah lives in Pinebrook with her husband Mark, their children Jack and Sydney, and their two rescue dogs Lola and Butch Cassidy.
See stories by Sarah Ervin