Sixteen critical voices across film, art and culture will grant this year’s awards for feature and short films, which will be announced Friday, Jan. 27.

This year’s awards ceremony will be an intimate gathering of artists comprising the festival lineup, with the festival’s social channels sharing the award recipients as they are announced.

"Together they will embark on a journey through our program to highlight the artistic achievements and honor the compelling storytelling in this year’s festival," Kim Yutani, the festival’s director of programming, said. "We can’t wait to hear what they think."

The jury for Alfred P. Sloan Feature Film Prize is Dr. Heather Berlin, Jim Gaffigan, Dr. Mandë Holford, Shalini Kantayya, and Lydia Dean Pilcher. They deliberated in advance of the festival and awarded the prize to "The Pod Generation," directed by Sophie Barthes.

"The jury plays a crucial role in the festival by amplifying breakthrough works and providing the audience with further opportunities for discovery," Sundance Institute CEO Joana Vicente said.

Festival audiences attending in person will have a role in voting for the 2023 Audience Awards, open to films in the U.S. Competition, World Competition and NEXT categories. Attendees are also able to vote for "Festival Favorite," which is selected from the entire feature film program. 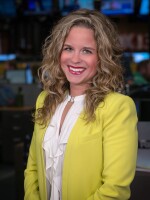 Ashton Edwards
Ashton Edwards jumped at the chance to join the KPCW team as director of digital media in 2022. She has been telling stories for a living for about a decade with stints in Oklahoma City, Salt Lake City, St. Louis and now Park City.
See stories by Ashton Edwards
The Sundance Reel
Related Content